Home of The Royal Teashop

The cover of Summer's Promise- Book IV of The Royal Teashop series is finally here!
I thought I would share it here. 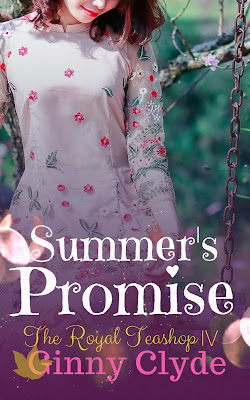 Book 4 of The Rose April is up on pre-order!

This took longer than I thought it would. Buttt...the story arc has nicely wrapped up and all loose ends tied up. Can't wait to share it with everyone soon. It comes sometime in April, 2018 but you can pre-order it. 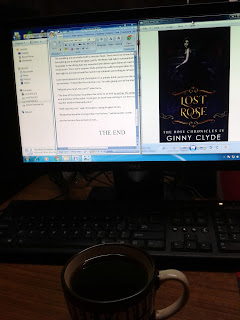 A long due celebration

In one of the author groups that I am in, writers occasionally post a picture of their finished manuscript on their computers along with a drink of choice to mark finishing the first draft of their books. I have often been shy of doing this but I ALWAYS wanted to. One of the struggles that come with being an introvert, I guess *LOL*


This is not for a first draft celebration but a celebration of the first real publishing effort I am giving this series. I wrote it during a period of depression and despite receiving a five star from Readers' Favorite, I didn't think it was good enough.
Now that the clouds have shifted, I am making a fresh effort.
Drink of choice: Indian masala chai [I call it Yogi Chai in my books to make it sound more exotic than it really is. You can get the recipe here.]

The pieces of cake look weirdly shaped because they are homemade and I made a clumsy job of trying to cut them up and plate it in a chef-like fashion. *Hope Gordon Ramsay doesn't stumble upon this*
Also this pic gives a peek at my workstation. I DID make an effort to clean it up a bit for the photo! 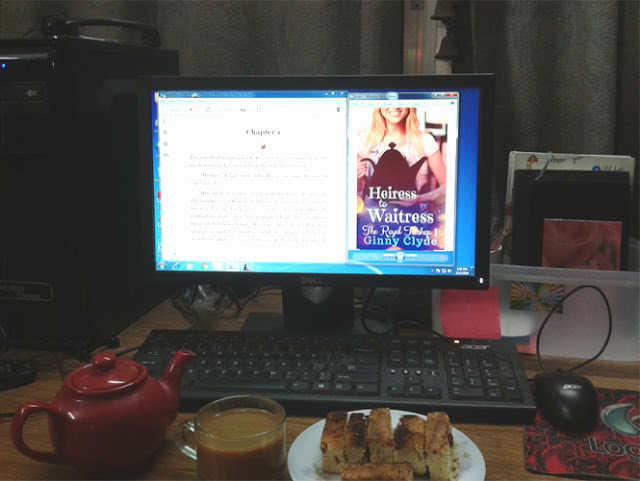 Yogi Chai is the specialty and most served tea at Bramble Wood's Royal Tea Shop. So, here's a recipe for all you to enjoy. 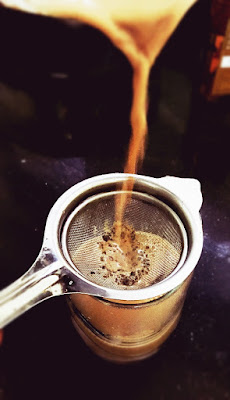 The Yogi Chai is a variation of the popular Indian tea called chai. It is an infusion of spices with black tea and served with milk and sugar. In India, it is the equivalent of a pick-me-up because the hot, spicy tea rejuvenates you like nothing else. Just a few sips of it will bring back your lost vigor.For a mug of this chai (about 10 oz) you will need:Equal quantity of milk and waterCardamom pods- 3Cloves- 4Cinnamon stick- 1/2 inch stickPepper corns- 2Ginger- 1 inch, gratedBlack tea (Assam tea works best)- 2-3 heaped teaspoons depending on how strong you want itSugar to tasteMethod:1) Put the milk and water into a saucepan.2) Crush the whole dry spices lightly and add to the saucepan.3) Grate the ginger and add the fresh herbs it to the mixture.4) Add the tea and bring it to boil. Simmer for five minutes. The longer it stays on the stove, the stronger the flavor.5) Take it off the flame and pour in your favorite mug through a sieve to catch all the bits.6) Enjoy while hot!Goes well with cakes and hot, fried snacks.If this wayyyy too much bother, you can buy this ready to use mix. I use this too lolWagh Bakri Masala Chai. (Available on Amazon!)
at February 11, 2018 No comments:

My depression and my creativity

This is really weird but I never really realise I am depressed until I am out of it.

Towards the end of last year I found myself regretting my choices and losing my way. A very dear friend betrayed my trust and proceeded to harm me.

It took me a while to find my stance and recover my sanity. And in the meantime, my writing schedule was messed up. It is quite natural, I suppose for things to be messed when you are going through a rough emotional phase.

I usually wrote gothic fantasy stories in my Rose Chronicles series but during my depression,  my mind wanted something less dark and gloomy in terms of the atmosphere that I was writing in. Instead it began forming a story in a cheerful tea shop with an eccentric owner.

Long story short, it was the birth of my Royal Teashop series. It is essentially a young adult contemporary romance but leans heavily towards women's fiction as well. As with all my stories, this has strong focus on relationships. Some will make you feel good and warm and others would remind you of the reality we live in.

I am usually a person who loves to read fantasy (any kind). To my surprise, I planned a four book series that was set in a contemporary world. And to further increase my incredulity, I wrote the first three while the fourth is scheduled to be released this summer.

Now while I was depressed, I had a wild idea of publishing the stories under a different pen name. And the impatient woman that I am, I went for it. I published the books under the name Ivy Ruthven. But here's the thing about depression. It doesn't allow you get the full picture. I was trying to hide this self of mine from my readers.

Now that I no longer feel the need to hide under my blankets, I have republished the books under my actual pen name and I am proud to present these books to you.

They all release this February and you can pre-order your copies for $0.99 until then. Here they are!

And this post would be unfinished until I acknowledged the wonderful friends I have made in the writing community. They helped me get through my issues. I am so blessed to be surrounded by such giving and kind people.

And as for the readers of my Rose Chronicle series, fear not! I will bring you some more new books this year and more!

I take great pleasure in introducing you to the culinary world of Maldorfina, the Carpathian realm protected by the Drakians and their Guardians. This is an attempt to design recipes that have been inspired by the kind of food they ate during their quests.
Often times, they would have to spend a few days in the formidable dark forests until they reached their destinations. During this time, they would depend on the hard rye bread, strips of dried meat and plum wine that they would carry with them in their saddles. However, it was deemed to be a poor meal by these noble lords.
Being skillful warriors, hunting came easy for them. The Carpathian forests teamed with wildlife such as rabbit and deer, offering them a chance to make delicious stews and barbecues over open campfire. Good availability of garlic, root vegetables and herbs in the woods aided them to have hearty meals while they were away from home. A good side effect of the blazing flames was that it kept wild animals and the nulan at bay.
The dishes described in this series are hearty, filling and full of flavor that will make you feel as energetic as our heroine, Lenara Gerrickson. I hope that you will enjoy each of the recipes and the ingredients that induced me to come up with them. Let me know if you would like more recipes like these from the world of The Rose Chronicles.
Today I am starting things off with a spicy chicken paprikash! 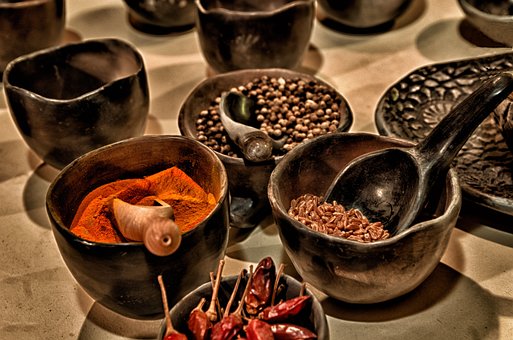 The Guardians often caught rabbit for their dinners. There were plenty of them in the woods and were quite easy to catch with proper traps. They provided a good source of meat as well as flavor to their soups or stews.
Since not all of us have access to rabbit meat in our supermarkets, I cooked this recipe with chicken. It makes an amazing winter warmer.

METHOD:
[1] Pat dry the pieces of chicken.
[2] Heat a deep saucepan and add olive oil. Add pieces of chicken to it, making sure not to overcrowd the pan. Sprinkle with salt and pepper. Browning the meat will add flavor to the sauce later.
[3] Once the chicken has been browned on both the sides, transfer it to a plate.
[4] In the same pan, add onions and peppers. Stir them on a medium low flame. Cook for about 8 to 10 minutes until they caramelize.
[5] Add paprika and stir constantly to avoid scorching.
[6] Add the stock. Mix well and return the pieces of chicken into the pan along with all the juices. Bring to a boil, cover and cook on low flame.
[7] While the chicken is cooking, whisk together the sour cream and flour until smooth.
[8] When the chicken is cooked, take a spoon of the cooking liquid and add to the sour cream mixture, mixing well. Do this for a couple of times until the cream mixture gets heated up and then add it to the saucepan. Keep the flame at its lowest and stir well. When the sauce starts to thicken, switch off the flame.

By now, you will have a lovely, vibrant thick sauce with tender pieces of chicken that is falling off the bones. Sprinkle some chopped parsley on top and serve it with silky egg noodles or plain steamed rice.
at February 04, 2018 No comments:

I've always loved watching vampire movies. Back when I was young, they were mostly part of horror movies and were *actually* scary. Still, I loved them.

When Twilight came about, vampires were handsome teens in love with regular high school girls. I loved them then too.

Now, I read vampire books that have both horror and romance in them and everything in between. If you are like me, you'd love this giveaway. Enter and have the chance to win these awesome books and this really cool vampire hunting kit ;) 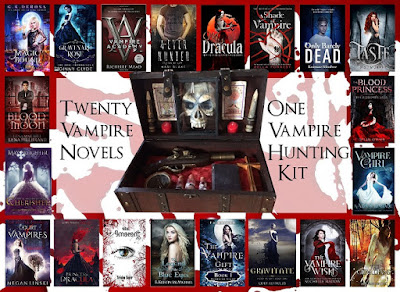 The cover of Summer's Promise- Book IV of The Royal Teashop series is finally here! I thought I would share it here.

Get an exclusive story from The Rose Chronicles

Get started on this Gothic paranormal fantasy today!

Of Dreams and Dragons

Make your own Yogi Chai!